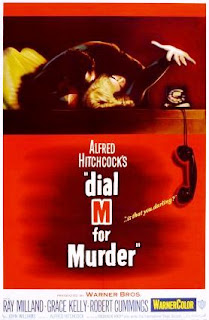 Plot overview: After learning about his wife Margot's (Kelly) affair, English tennis player Tony Wendice (Milland) blackmails an old school chum (Dawson) into murdering her. After his seemingly perfect scheme goes awry, however, Tony must frame his wife instead.
I love Hitchcock. What an expansive career this Master of Suspense had. That being said, this may be one of the first times I've reviewed one of his movies that I wouldn't actually consider a horror. Based off of the play by screenwriter Frederick Knott, this movie makes the horror blog with a whopping PG rating. Talk about amateur hour. Unlike Strangers on a Train, The Birds, and especially Psycho, Dial M for Murder is more similar to his films like Rope or even Rear Window (my personal favorite) in that they deal more with the suspense, meticulous planning, and repercussions of a crime than the actual horror of it (not to mention the majority of the action taking place in a single room). Regarding Strangers on a Train, both films share the 'perfect murder' and blackmail concepts, as well as two main characters both being professional tennis players (think doubles and double-crossing).
Hitchcock loved few things more than the perfect plot and 'wrongfully accused' scenarios, and these themes are exactly what this film ultimately comes down to. We have strong performances from all of our leads, with an especially creepy Anthony Dawson as the hitman and a wonderfully British Chief Inspector in John Williams— not surprisingly, both of these actors played the same roles in the 1952 Broadway production of the show. Ray Milland plays a fantastically eerie and calmly maniacal husband who remains fixated on manipulating and deceiving all those around him until he can exact the perfect revenge on his unfaithful—yet still dedicated—wife. Speaking of which, this was Kelly's first time working with Hitchcock, and apparently he enjoyed her work so much that she would go on to star in Rear Window (that same year!) as well as 1955's To Catch a Thief.
The most notable aspect of this film is the cinematography. The movie was originally filmed to be shown in 3D, but due to technical issues and poor audience reception, it was released as your regular flat movie and went on to achieve general acclaim at the box office. Shot almost entirely inside the Wendices' apartment—and with that one fantastic "God's eye" view from above the scene—the suspense of this movie is established more through plot that any trick of the camera. Hitchcock was a professional at perverting his audience into not only witnessing crime but partaking in it. As Rear Window becomes a shocking lesson in voyeurism, so Dial M for Murder finds us practically rooting for Tony and his hired man Lesgate/ Swann to get away with the seemingly perfect crime. Indeed, the suspense in this movie comes in the form of us expecting—but not knowing if—the murder will go off without a hitch— until Tony's watch stops and the whole things seems to fall apart before our eyes. As Hitchcock himself said, "The best way to do it is with scissors" (I see you, Jordan Peele). At the climax of our suspense, we witness an accidental death marking one of very few times we actually witness something so visceral in a Hitchcock movie (most of the action usually takes place just offscreen and is implied). Though Grace Kelly shines brighter in Rear Window, her character's progression in this film is marked in beautiful ways, such as her wardrobe changing from whites, to blues, to greys, to black, or during the almost dreamlike (nightmarish?), hallucinatory courtroom scene and the lighting therein.
*SPOILER ALERT*
If you're a fan of Hitchcock, you're likely to enjoy this film: The theme of control, common in the director's filmography, runs strong in this movie, especially as demonstrated by the maniacal Tony. It is this strong need for control that ultimately creates even more suspense as the pieces—just seconds beforehand so perfectly aligned—start to fall apart. My biggest qualm from a realistic point of view is that, while the clever Chief Inspector Hubbard uses wisdom, insight, and luck to hypothesize his solution to the crime, it seemed to me that none of his investigation was actually very legal, at least in terms of his swapping coats and keys or sneaking into the Wendices' apartment as he pleased. Love a perfect crime puzzle to be so expertly solved, but it left me wondering just how ethical his approach was.
Final critique: This is a lovely and enjoyable film, even if it's not one of Hitchcock's absolute best pieces of work. To clarify, I make my ratings based on what constitutes a good horror movie, so that is why this film only gets a B+ from me while other, arguably much poorer quality movies have gotten higher ratings in the past. With a dazzling cast and even better suspense, we see a movie flipped on its head halfway through, and we continue to go along for the whole unexpected ride. In terms of the scare score, as I stated earlier, this really isn't a horror film as I'd traditionally define it, so while the suspense might have you holding your breath as the 'perfect crime' comes to a climax, I don't think anyone is going to get too scared by this film. Instead, it's a perfect watch when you want something suspenseful or creepy, but with more of a crime drama feel instead of anything too horrifying.

OWY.ES is a completely free tool where you can create short links, which apart from being free, you get paid! So, now you can make money from home, when managing and protecting your links. Register now!

Signup for an account in just 2 minutes. Once you've completed your registration'. 'just start creating short URLs and sharing the links with your family and friends.